As Composition instructors, our work with students’ writing largely consists of helping them achieve their writing goals as they revise to reach audiences for their intended purposes.  Term Instructor Peggy Scolaro built on her experience in the classroom for her first editorial work on The Dream King in 2018.  Since then, Scolaro continued her editing work with Quong Quy Huynh on his book, God’s Crucible: We Who Dream of a Better Life. 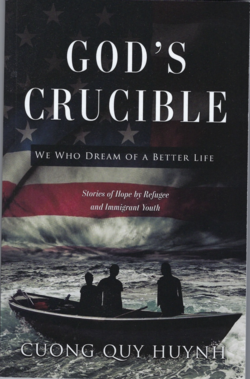 Published by A Book’s Mind late last summer, God’s Crucible—the title taken from Israel Zanwill’s phrase for America’s melting pot—is a collection of young people’s narratives about their experiences as immigrant and refugees.  As a former refugee from Vietnam, Huynh knows these stories firsthand and can attest to immigrants and refugees’ “dedication and perseverance to [overcoming] difficulties and obstacles in coming to America and their lives living in this nation.”

The book emerges from Huynh’s work with the non-profit he founded and leads, Enlightened Initiative, an organization empowering refugee and immigrant young people by investing in their lives.  Huynh and his wife Jesecca have over twenty-five years of service to vulnerable young people.

After working with Huynh on the book, Scolaro planned for him to visit and speak to her ENGH 302 students about the book’s themes, but those plans had to be cancelled with interruptions from COVID-19. Assistant Professor Kevin Flanagan’s book War Representation in British Cinema and Television: From Suez to Thatcher, and Beyond was published by Palgrave last fall.  The book is based on his dissertation work at the University of Pittsburgh, and it tracks changes in the way war was visualized in Britain in the decades that followed the Second World War. The book argues that this period of the mid-1950s through 1980 is remarkable for the fracturing in consensus around what war means to the nation.

While exploring general traditions in war films, the book focuses on film and television works that challenge notions of realism and heroism by exploring war through tragedy, satire, simulation, and displacement. Though many of the works covered were major cultural events, the book gives equal coverage to lost, obscure, and previously marginal examples.

In addition to teaching Composition courses, Flanagan teaches ENGH 202: Literature and Film about Filmmaking; he also presents and writes frequently on film studies.

If you have published or edited a work recently, please send us a note—we’d love to feature you.